Paralyzed in a tragic accident, Pam Morgan was told there was no hope, no chance at all that she would ever walk again. But what the doctors delivering that fate didn't know was that as long as you have faith and a song in your heart, nothing is impossible.

The highway stretched for mlles. The midday sun beat down. As billboards and motels sped by, Pam Morgan yawned.

The music tour she and her songwriter husband, Phil, had embarked upon made the 32-year-old Kansas City, Missouri, mom weary. Her girls, five-year-old Kayla and 21-month-old Alisha were wiped out, too. Kayla had fallen right to sleep. But Alisha, overtired, began to fuss, so Pam made her way to the back of the van to soothe her. But while trying to quiet Alisha, Pam, more tired than she realized, dozed off, too.

Then, suddenly, tires screeched. Glass shattered. Metal exploded. And Pam was flying above bushes, skidding across rocks, gravel, dirt. And then... darkness.

When her eyes fluttered open again, Pam struggled to make sense of the haze around her. Slowly walls came into focus, then the hospital bed and Phil's face, damp with tears.

Where am I? she panicked. She tried to speak but couldn't. Why is Phil's arm in a sling? she wondered. And then she remembered. An accident! she realized. Kayla and Alisha! she screamed -- but no sound came out.

Days passed before Pam was strong enough to hear what had happened. The van had gone out of control and veered off the road slamming into a bridge abutment and landing on its side. Phil and the girls had been wearing seat belts, so other than Phil's minor injuries, all three were fine. But Pam...

"You were thrown out the window," Phil said.

"You nearly died!" he cried. "We almost lost you!"

And as chilling as a winter wind the horrible truth tumbled out: Pam would be a quadriplegic for the rest of her life. Hers was the worst case of spinal dislocation doctors had ever seen&emdashshe would never walk again.

No! Pam breathed. And that night staring into the darkness, she thought of her girls. We're in the middle of teaching Kayla to ride a bike, she wept. And Alisha's just started running on those chubby legs. They need a mother who can...

No, she decided, wiping away her tears. I've got to be strong for them!

And so Pam did what she always did when fear seized her: she sang. Of all the songs she loved, the words of one Phil had written filled her head: "God chooses who He uses to do mighty deeds," she warbled. "The broken and the ruined are all that He needs... "

Now I'm the one who's broken and ruined, she thought. Yet never had the lyrics held more meaning for Pam; never did the melody strike such a deep chord within her heart. And in that moment, she felt her faith rise.

I'm going to beat this, she vowed. I will walk again. 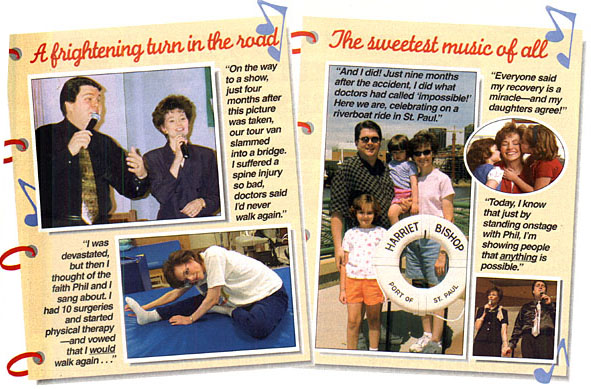 The next day, Pam felt a new sense of calm. "I'm going to walk again," she announced.

Their silence spoke volumes. They don't think I can do it, Pam realized. But when she told Phil, she received only smiles. And when he described the accident on his website, folks they never even met began rooting for Pam, too.

"I'm not much of a praying man," a man from halfway around the globe typed, "but I believe there's something special planned for you."

Something special, Pam agreed as she had the nurses hang Kayla's drawings of rainbows and angels on the walls. And she tried to remind herself of it as she underwent skin grafts, spinal fusions, bone reconstructions -- 10 surgeries in all.

Then one day, a friend was painting Pam's toenails red when she screamed.

"You moved your big toe!" her friend cried.

Pam stared at her big toe. "Move," she whispered. Nothing.

It was just a twitch, but for Pam, it was a sign that nothing was impossible.

And over the next weeks, Pam showed other signs of improvement -- a muscle jump here, the sensation of pins and needles there. But when she was released from the hospital 2 1/2 months after the accident, she still couldn't walk... or change a diaper, or fix dinner for the girls. "I can't even feed myself'." she sobbed.

And as Kayla and Alisha raced into the room to greet Pam squealing as they climbed into her lap, she knew he was right.

A month passed, then three, then five. Pam never missed a day of physical therapy, and, little by little, her body responded. The strength in her left leg increased; feeling returned to her arms. One day she moved her knee sideways. Another day, she raised her foot.

And six months after the accident, Pam's therapist smiled. "You're ready," she announced, positioning a walker before her.

But as she stood there, Pam suddenly heard music rise from somewhere deep inside. She took a step. Then another. She was walking!

Pam's doctor just shook his head in disbelief. He pored over medical literature dating back more than 50 years looking for an explanation. "But there isn't any," he marvels. "To have a complete spinal cord injury, then walk again... there's no other way to classify this except to say it's miraculous!"

Pam couldn't help but agree. Soon she was back at the playground with the girls -- and not long after that, she and Phil were in the recording studio recording a new CD inspired by Pam: Living Proof.

And today, as the curtain rises Pam winks at her little girls offstage, and from the bottom of her soul, she sings: